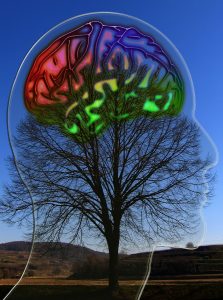 Scientists are excited because in a recent study they found a brain tumor growing in a new way. Altered—or mutated—genes cause brain tumors, and scientists have a growing list of these genes.

And their suspicion proved correct. They unearthed a new accomplice to add to their list, IDH, an ordinary, seemingly innocent gene that had mutated, causing it to misbehave.

This delinquent gene, with a previously clean record, had disrupted the delicate, 3-dimensional architecture of our genetic code, DNA. This change in structure had nudged PDGFRA, a notorious cancer-causing gene nearby, and recruited it into action.

Together, this duo triggered one of the most common types of brain tumors—a glioma. Gliomas are made out of the sticky cells that surround nerves in the brain. A glioblastoma, a type of glioma, arises from a special type of sticky cell called an astrocyte and is particularly aggressive, needing intense treatment.

The team of researchers aren’t the only ones excited about this finding. A New York Times article reported this study, originally published in the New England Journal of Medicine—and caught the attention of Dr. Jeffrey N. Bruce and his colleagues at The Brain Tumor Center at Columbia University Medical Center/NewYork-Presbyterian Hospital.

Dr. Bruce and other neurosurgeons here at Columbia also conduct research on brain tumors, including gliomas. Although treatments for gliomas have gotten better, research is still needed to improve treatment and reduce its side effects.

Typically, a particular drug works better in brain tumors with a certain mutated gene than in others. To determine which drug or treatment is best to give, physicians often identify the mutated genes in a tumor. However, in this case, the PDGFRA gene was causing cancer but slid under the scientists’ radar because it was not mutated.

It was causing cancer in a new way. The neighboring gene, IDH, had mutated and by association had changed the DNA structure of PDGFRA. This caused PDGFRA to act like it was mutated and cause cancer. The way the two genes interacted is what caused the cancer–this is a new concept in cancer research.

With the PDGFRA gene wreaking havoc, scientists needed to shut it off. Armed with an understanding of how this dynamic duo works, the scientists had an idea.

They tested a drug used to treat cancer, 5-azacytidine, on brain cancer cells, and it worked! It corrected the 3-dimensional DNA structure. Both genes were stopped and forced to behave normally because of the drug, bringing the cancer to a halt.

However, treating these misbehaving genes with drugs in a laboratory isn’t the end. Next is conducting studies in volunteer patients. These studies are known as clinical trials, and the U.S. Food and Drug Administration requires clinical trials to determine whether to approve a drug for a disease and human consumption.

That’s where our neurosurgeons step in.

Dr. Bruce and his colleagues at the Brain Tumor Center participate in clinical trials and, by doing so, help bring research like what is described here from the laboratory to patients. These trials are done only when deemed safe and beneficial for the patient. And patient approval is always received before surgery. Should they decline, it in no way affects their treatment.

In a recent clinical trial, patients with glioblastoma were recruited for a new therapy. The therapy was a vaccine, Prophage, and it belongs to a new type of cancer therapy called immunotherapy, which harnesses the body’s immune system to fight cancer.

Dr. Bruce collaborated with other researchers to conduct clinical trials to administer this vaccine to patients with glioblastoma. Patients who received the vaccine had a longer median survival, and the results were presented at the American Society of Clinical Oncology 2015 annual meeting.

Despite good results, the vaccine is not publicly available yet for treatments. Additional studies are required and then the FDA must approve the vaccine for general human use.

Our neurosurgeons are interested in this new research because they too conduct research. They applaud efforts to learn more about these brain tumors, with the goal of bringing better treatment to all patients.

Learn more about Dr. Bruce on his bio page here.

Learn more about all our neurosurgeons at the Brain Tumor Center at their links below:

Learn more about Columbia Neurosurgeons and the Department of Neurosurgery at Columbia here.