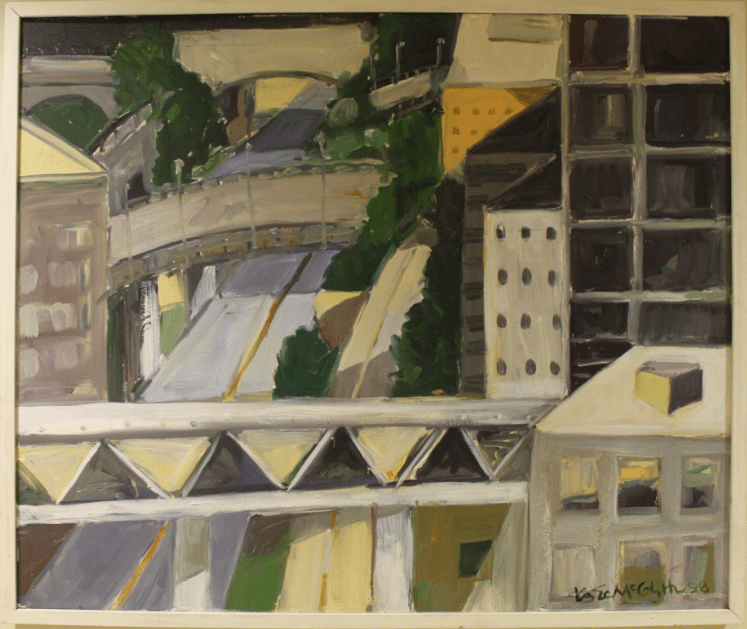 ‘The New Walkway’ by Kate McGloughlin

Along a brightly lit hallway on the 4th floor of the Neurological Institute hangs a series of four oil paintings. Their muted colors and industrial lines capture the hospital’s surrounding neighborhood of Fort Washington.

They were painted by Kate McGloughlin from a handful of sketches she made while waiting for her twin brother, Michael, to recover from brain surgery.

“Michael was a strapping young Irishman,” says Kate.  “He was just swinging along in his life, doing everything right, when he started getting these headaches.”

This was in 1989 and Michael was just 27 years old. Kate remembers, “He had been having a hell of a time all spring long. We finally got him down to the local emergency room.”

Michael’s surgeon, Dr. Michael B. Sisti from the Brain Tumor Center and  the Gamma Knife Center says, “Michael had a tumor in the front of his brain. The surgery was very successful; the tumor just popped right out. There was no invasion into the brain.”

Kate says, “Michael, through the entire time, had the most optimistic outlook. It was so infectious. We just never thought the guy would die.  He’d be fine for 20-24 months and then he’d start with getting a seizure, or his one eye would look funny. It was a bear of a tumor. It just kept growing back.”

During one of Michael’s last operations, Kate says, “I took my sketch book and did eight or ten little sketches.” Kate is a print maker and a painter and from those six sketches came about 35 pieces.

“The gallery I was working for in Woodstock loved them,” says Kate. “We had this big show called ‘Waiting for Michael,’ because that is what I was doing when I was doing those sketches.”  The critics loved them.   Michael himself was at the opening.  Kate says, “He was the big celeb. He loved that something good could come from something so difficult.”

But, after nine years of repeated surgery, chemotherapy, and radiation, “Michael had really had it,” Says Kate. “He was done.”  Michael died a few months after the exhibit.

Things got dark for Kate for a while, and so did her art work. She says, “I really had to make room on the bus for grief. The irony is that after that, my career took off.

About a year later I got a call, kind of randomly, from a guy named John Collins at the Department of Neurosurgery inquiring about the artwork. I said the only ones I have left are the large oils and he said ‘we’ll take them.’

It was a stroke of great fortune for me because, my studio was down in this tractor garage and got completely flooded that year, and I lost a lot of work.”

Kate opened a new account with the money she got from the Department of Neurosurgery, and determined to put any art proceedes towards building a new studio.  “And, don’t you know, once I opened that account and started putting money in it, I started selling work hand over fist. It was unbelievable.”

By the summer of 2000 Kate had drawn up the plans, had the building permits, and was building her studio.

It sits on her family’s old Dairy farm in Olivebridge, New York. Fashioned after a chicken coop, the 14×24 foot building has high ceilings, lots of light, and a tin roof for the sound of the rain.

“The other beautiful part,” says Kate, “is that, Michael’s friends helped me build it.  Actually build it–with hammer and nails.  I have this beautiful wall of Northern light because of one friend who got us all these recycled windows. 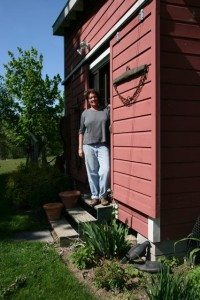 Every time I walk in there it is like another gift.  It is very inspiring.  There is something—I don’t want to get too corny—it’s like walking into a church in a way.  The studio that Michael built.”

We are privileged to have Kate’s paintings, and all they represent, hanging in our hallway. “I walk by Kate’s paintings everyday on the way to my office before going to surgery,” says Dr.Sisti. “The beauty of the paintings and their connection to Michael, Kate, his family, and our hospital has been a source of daily inspiration to me since the first day they were hung up.  They demonstrate art’s power to speak to our struggles, memories, and hopes.”
Thank you Kate.
You can learn more about Kate and see more of her artwork at www.katemcgloughlin.com.
In Michael’s honor, donations are welcome at the Olivebridge United Methodist Church Food Pantry, PO Box 1397, Olivebridge, NY 12461.